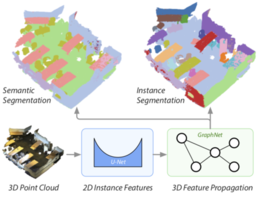 Recent deep learning models achieve impressive results on 3D scene analysis tasks by operating directly on unstructured point clouds. A lot of progress was made in the field of object classification and semantic segmentation. However, the task of instance segmentation is less explored. In this work, we present 3D-BEVIS, a deep learning framework for 3D semantic instance segmentation on point clouds. Following the idea of previous proposal-free instance segmentation approaches, our model learns a feature embedding and groups the obtained feature space into semantic instances. Current point-based methods scale linearly with the number of points by processing local sub-parts of a scene individually. However, to perform instance segmentation by clustering, globally consistent features are required. Therefore, we propose to combine local point geometry with global context information from an intermediate bird's-eye view representation.


Know What Your Neighbors Do: 3D Semantic Segmentation of Point Clouds 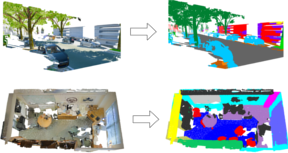 In this paper, we present a deep learning architecture which addresses the problem of 3D semantic segmentation of unstructured point clouds. Compared to previous work, we introduce grouping techniques which define point neighborhoods in the initial world space and the learned feature space. Neighborhoods are important as they allow to compute local or global point features depending on the spatial extend of the neighborhood. Additionally, we incorporate dedicated loss functions to further structure the learned point feature space: the pairwise distance loss and the centroid loss. We show how to apply these mechanisms to the task of 3D semantic segmentation of point clouds and report state-of-the-art performance on indoor and outdoor datasets. 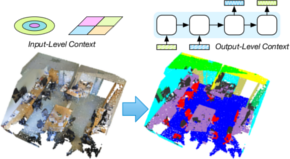 Deep learning approaches have made tremendous progress in the field of semantic segmentation over the past few years. However, most current approaches operate in the 2D image space. Direct semantic segmentation of unstructured 3D point clouds is still an open research problem. The recently proposed PointNet architecture presents an interesting step ahead in that it can operate on unstructured point clouds, achieving decent segmentation results. However, it subdivides the input points into a grid of blocks and processes each such block individually. In this paper, we investigate the question how such an architecture can be extended to incorporate larger-scale spatial context. We build upon PointNet and propose two extensions that enlarge the receptive field over the 3D scene. We evaluate the proposed strategies on challenging indoor and outdoor datasets and show improved results in both scenarios. 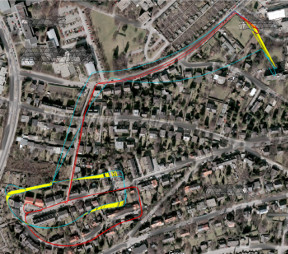 Complementing images with inertial measurements has become one of the most popular approaches to achieve highly accurate and robust real-time camera pose tracking. In this paper, we present a keyframe-based approach to visual-inertial simultaneous localization and mapping (SLAM) for monocular and stereo cameras. Our method is based on a real-time capable visual-inertial odometry method that provides locally consistent trajectory and map estimates. We achieve global consistency in the estimate through online loop-closing and non-linear optimization. Furthermore, our approach supports relocalization in a map that has been previously obtained and allows for continued SLAM operation. We evaluate our approach in terms of accuracy, relocalization capability and run-time efficiency on public benchmark datasets and on newly recorded sequences. We demonstrate state-of-the-art performance of our approach towards a visual-inertial odometry method in recovering the trajectory of the camera. 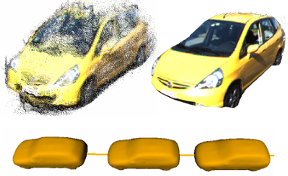 Inferring the pose and shape of vehicles in 3D from a movable platform still remains a challenging task due to the projective sensing principle of cameras, difficult surface properties, e.g. reflections or transparency, and illumination changes between images. In this paper, we propose to use 3D shape and motion priors to regularize the estimation of the trajectory and the shape of vehicles in sequences of stereo images. We represent shapes by 3D signed distance functions and embed them in a low-dimensional manifold. Our optimization method allows for imposing a common shape across all image observations along an object track. We employ a motion model to regularize the trajectory to plausible object motions. We evaluate our method on the KITTI dataset and show state-of-the-art results in terms of shape reconstruction and pose estimation accuracy. 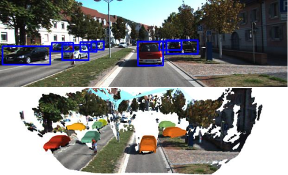 Estimating the pose and 3D shape of a large variety of instances within an object class from stereo images is a challenging problem, especially in realistic conditions such as urban street scenes. We propose a novel approach for using compact shape manifolds of the shape within an object class for object segmentation, pose and shape estimation. Our method first detects objects and estimates their pose coarsely in the stereo images using a state-of-the-art 3D object detection method. An energy minimization method then aligns shape and pose concurrently with the stereo reconstruction of the object. In experiments, we evaluate our approach for detection, pose and shape estimation of cars in real stereo images of urban street scenes. We demonstrate that our shape manifold alignment method yields improved results over the initial stereo reconstruction and object detection method in depth and pose accuracy. 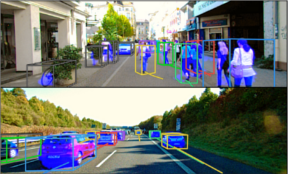 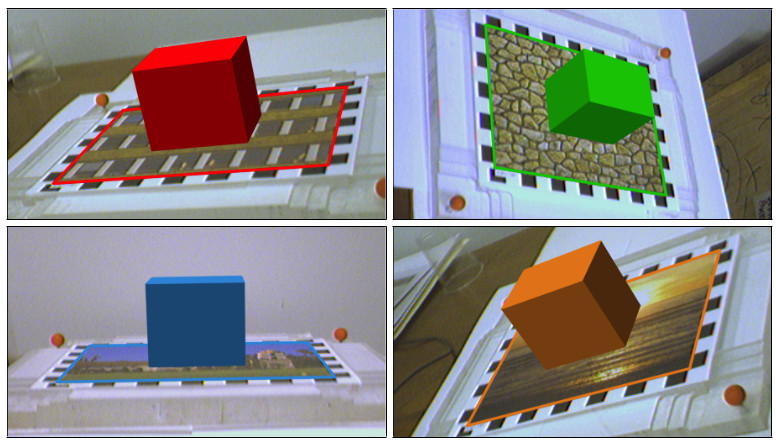 In this work, we implemented an AR framework for planar targets based on the ORB feature-point descriptor. The main components of the framework are a detector, a tracker and a graphical overlay. The detector returns a homography that maps the model- image onto the target in the camera-image. The homography is estimated from a set of feature-point correspondences using the Direct Linear Transform (DLT) algorithm and Levenberg-Marquardt (LM) optimization. The outliers in the set of feature-point correspondences are removed using RANSAC. The tracker is based on the Kalman filter, which applies a consistent dynamic movement on the target. In a hierarchical matching scheme, we extract additional matches from consecutive frames and perspectively transformed model-images, which yields more accurate and jitter-free homography estimations. The graphical overlay computes the six-degree-of-freedom (6DoF) pose from the estimated homography. Finally, to visualize the computed pose, we draw a cube on the surface of the tracked target. In the evaluation part, we analyze the performance of our system by looking at the accuracy of the estimated homography and the ratio of correctly tracked frames. The evaluation is based on the ground truth provided by two datasets. We evaluate most components of the framework under different target movements and lighting conditions. In particular, we proof that our framework is robust against considerable perspective distortion and show the benefit of using the hierarchical matching scheme to minimize jitter and improve accuracy.